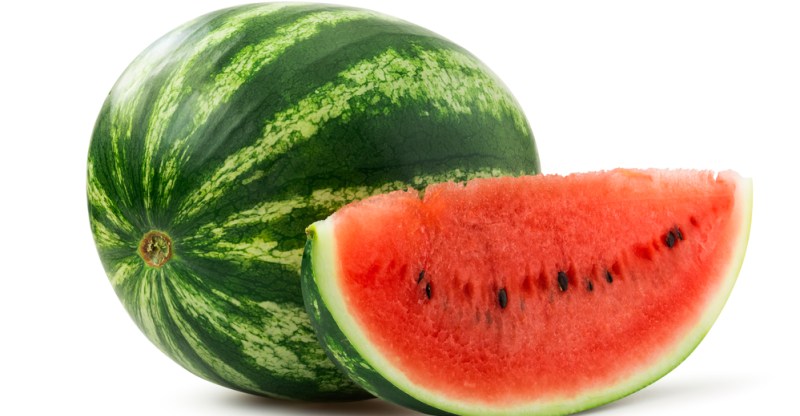 Watermelon is a low-calorie, hydrating fruit that is a natural high antioxidant food, plus a source of vitamins and minerals that can help fight inflammation, free radical damage and prevent a number of serious illnesses. “Foods that are high in antioxidants and amino acids allow your body to function optimally,” said Angela Lemond, a Plano, Texas-based registered dietitian nutritionist and spokesperson for the Academy of Nutrition and Dietetics. Antioxidants help prevent damage, and cancer. Amino acids are the basic building block for protein, and protein is used in virtually every vital function in the body.

Scientists have taken notice of watermelon’s high lycopene levels (about 15 to 20 milligrams per 2-cup serving) which are some of the highest levels of any type of fresh produce. Lycopene is a phytonutrient, which is a naturally occurring compound in fruits and vegetables that reacts with the human body to trigger healthy reactions. It is also the red pigment that gives watermelons, tomatoes, red grapefruits and guavas their color.

Lycopene has been linked with heart health, bone health and prostate cancer prevention. It’s also a powerful antioxidant thought to have anti-inflammatory properties, according to Victoria Jarzabkowski, a nutritionist with the Fitness Institute of Texas at The University of Texas, Austin.

To really maximize your lycopene intake, let your watermelon fully ripen. The redder your watermelon gets, the higher the concentration of lycopene becomes. Beta-carotene and phenolic antioxidant content also increase as the watermelon ripens. Beta carotene is an antioxidant found in red-orange fruits and vegetables and it helps with immunity, skin, eye and the prevention of cancer.

A 2011 study in the Journal of Food Composition and Analysis that investigated five types of watermelon at four stages of ripening found that unripe watermelon with primarily white flesh has nearly zero beta-carotene. By the time it is fully red, the fruit has become an excellent source of the phytonutrient. Recent studies have found that watermelon seeds are also wonderfully nutritious, especially if they are sprouted and shelled. They are high in protein, magnesium, vitamin B and good fats, according to an analysis by the International Journal of Nutrition and Food Sciences.

Nutrition facts
Here are the nutrition facts for watermelon, according to the U.S. Food and Drug Administration, which regulates food labeling through the National Labeling and Education Act:

Heart health
Watermelon’s high levels of lycopene are very effective at protecting cells from damage and may help lower the risk of heart disease, according to a study at Purdue University. They help to prevent both low potassium and magnesium deficiencies, and these are two critical nutrients used to help remedy high blood pressure naturally.

Watermelon may be especially important for older women. A study published concerning menopause found that postmenopausal women, a group known to have increased aortic stiffness, who took watermelon extract for six weeks saw decreased blood pressure and arterial stiffness compared to those who did not take watermelon extract. The authors of the study attributed the benefits to citrulline and arginine as these can help improve blood flow and may help reduce the accumulation of excess fat.

Anti-inflammatory properties
Lycopene, found in watermelon, is an inhibitor for various inflammatory processes and also works as an antioxidant to neutralize free radicals. Additionally, the watermelon contains choline, which helps keep chronic inflammation down. Studies also show that vitamin C found in watermelon is especially beneficial to individuals whose immune system has been weakened due to stress, which is one of the biggest reasons for ongoing inflammation that we see in today’s modern society.

Reducing inflammation isn’t just good for people suffering from arthritis. When you’re sick, you have cellular damage which can be caused by a variety of factors including stress, smoking, pollution, disease, and your body becomes inflamed. It’s called ‘systemic inflammation’. In this way, anti-inflammatory foods can help with overall immunity and general health.

Hydration and Digestion
Watermelons help with overall hydration, and that is a great thing as we can get 20-30 percent of our fluid needs through our diet alone. This can even help prevent heat stroke. Watermelon also contains fiber, which encourages a healthy digestive tract and helps to regulate pH levels while also, lessening inflammation and acid production throughout the body. Additionally, their juice is full of good electrolytes which helps to balance water retention in the gut and keeps you from becoming dehydrated. Filled with water and easy on digestion, it can work as a natural cure for diarrhea.

Skin and hair benefits
Vitamin A is stellar for your skin, and just a cup of watermelon contains nearly one-quarter of your recommended daily intake of it. Vitamin A helps keep skin and hair moisturized, and it also encourages healthy growth of new collagen and elastin cells. Vitamin C is also beneficial in this regard, as it promotes healthy collagen growth. Antioxidants like these protect skin from damaging free radicals that are produced when skin is exposed to harmful ultraviolet light or allowed to age naturally.

Muscle soreness & athletic performance
Watermelon-loving athletes are in luck: drinking watermelon juice before an intense workout helps reduce next-day muscle soreness and heart rate, according to a 2013 study published in the Journal of Agricultural and Food Chemistry. This can be attributed to watermelon’s amino acids citrulline and arginine, which help improve circulation and reduce muscle soreness.

A 2015 study published in the Journal of Applied Physiology suggests that watermelon’s citrulline may also help improve athletic performance. Study participants who took citrulline supplements saw a boosted performance with more power production in high-intensity exercise like cycling and sprinting.

Cancer prevention
Like other fruits and vegetables, watermelons may be helpful in reducing the risk of cancer through their antioxidant properties. Research from the Journal Nutrition has concluded that watermelon can help the immune system stay strong and defend against cardiovascular diseases, making it a natural cancer treatment due to its effect on nitric oxide levels. Lycopene in particular has been linked to reducing prostate cancer cell proliferation, according to the National Cancer Institute. Indeed, watermelon is a healing food because of its ability to protect the body from sickness and reboot the digestive tract, where much of the immune system is actually located.

Health concerns about watermelon
If eaten in reasonable amounts, watermelons should produce no serious side effects. If you eat an abundance of the fruit daily, however, you may experience problems from having too much lycopene or potassium.

The consumption of more than 30 mg of lycopene daily could potentially cause nausea, diarrhea, indigestion and bloating, according to the American Cancer Society.

People with serious hyperkalemia, or too much potassium in their blood, should probably not consume more than about one cup of watermelon a day, which has less than 140 mg of potassium. According to the National Institutes of Health, hyperkalemia can result in irregular heartbeats and other cardiovascular problems, as well as reduced muscle control.

Watermelons are generally not known to be a common allergen or produce any common medication interactions. However, they are best enjoyed in moderation due to their relatively high sugar content. Although, these are naturally occurring sugars, eating them in large amounts can quickly spike blood sugar levels. Try pairing it with other foods that have healthy sources of protein, fiber and fats, too, in other to slow down the effect of watermelon’s sugar on your blood sugar levels. There are amazing watermelon recipes to this effect and you can find them here.

Loading up on water-dense foods like watermelon can be tempting for those looking to lose weight because they help you feel full, but there are cautions against going to extremes. Eating more fruits and vegetables of any kind naturally helps decrease overall calories (energy) of the diet as it is well known that people that eat higher quantities of fruits and vegetables typically have healthier body weights. However, I do not recommend eating only watermelon. You will lose weight, but that weight will be mostly muscle. My recommendation is always to vary your selections. Watermelon is a great hydrating food, so consume it along with other plant foods that offer other benefits.  Variety is always key.